I was super excited to have done the music, sound, and mix for this Cartoon Network Journeys VR trailer. I was involved in the game itself as well by contributing both music and sound. The game allows you to experience three worlds with very different experiences and my challenge for this trailer was to weave all of those experiences together to form something cohesive. I wanted to preserve the wonder, awe, and charm of Beyond Beeville's beautiful scenery, the silliness of Jest to Impress, and the trippy, bizarre qualities of Kosma Kwest while keeping the whole vibe lighthearted, fun, and inspirational. I knew initially that I wanted to use fun synths and percussion to keep things upbeat and voice to add character to the trailer. Later I focused on incorporating different instruments per section to help distinguish their different vibes - like adding flute and a canjo to the Jest to Impress section. I also edited and mixed cutdowns of this trailer - 90s, 60s, and 30s versions. 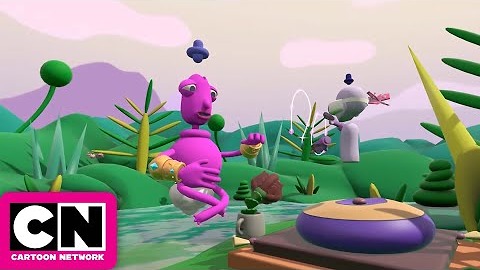 In this reel, I wanted to show my flexibility as a composer across a wide range of music styles while also highlighting who I am as a composer and what I love and prioritize in writing music for games. Below I'll list some of my thought processes about composing the music for each game shown in the reel and provide full tracks to listen to:

1. duOS is a game about two robots with different abilities helping each other escape a robot factory. I knew immediately I wanted the music to be dominated by simple synths and really fun metallic/industrial percussion to match the setting of the game. Thematically I wanted it to feel super fun, playful, expressive, and driving. There are also moments that feel really cartoony and silly. It was also important for me to mimick the game's play style in the compositions - a lot of the music plays upon two melodies intertwining with one another, mimicking the gameplay mechanic of having to use both characters to progress through levels. One of the game's basic sound mechanics are shown in this video as well - with the help of the game's programmer we set up a ducking system for music and dialogue, as well as a lowpass system for a blueprint mode the characters enter to record their actions.

2. Tetheron is local co-op aracde style game. It's 100% chaos and fun, and I designed the music to reflect that. Because of the simple visuals and mechanics of the game, along with it feeling like it belongs in an arcade, I wanted the music to be chiptune inspired. I didn't want it to feel stuck in the past so I combined it with some more modern electronic music elements as well - you'll hear some dub and industrial inspired textures. I also absolutely wanted to mimick the chaos of the game in the music and have it feel exciting and driving.

3. The music in Luminati is soothing, spacey, cosmic, and inspirational. I played with a lot of textures of sampled glass, gentle synths, and atmospheric piano to create this track. In the game, you have a gun that changes your orientation in space so I wanted the music to emphasize the weightless feeling of falling through space. I also wanted the music textures to feel cold and isolated - similar to how the player is completely alone in the game.

4. The first music being shown from The Other Half is Annalise's theme. In The Other Half, Annalise’s character is a doctor, highly intelligent, empathetic, thoughtful, and independent. She is also revealed to be a survivor of sexual assault through Daniel’s narrative flashbacks, but what most distinguishes her among the other characters in the game is her kindness towards the player’s character, the Hunter, and her fellow townspeople. I wanted the music to reflect all of this so I focused on a core simple melody that evoked a sense of strength and home. I chose this specific part of the game to show because it also reveals some of the interactivity I incorporated into the music for this game through using different layers and lighting torches to control a volume parameter.

5. The second track from The Other Half plays during a scene in which the character Daniel recounts his assault of Annalise. Conceptually, I wanted to make sure that the track reflected the bizarre visuals of the scene and Daniel’s delusions without condoning what he was saying. In the track you can hear a lot of pitch variation/warping- this was a deliberate decision I made to help the track feel like there’s always something *off* even in the very beginning. I also felt strongly that I wanted this music to still incoporate Annalise's voice, so many of the instruments I used were bits of Annalise's themes that I sampled. This track was also interesting from a technical point of view since I used FMOD to trigger differnet layers based off of dialogue. You can hear in the example that the music gets more and more chaotic as the narrative goes on, and that final layer was created using dsp effects inside of FMOD.

6. The final track from The Other Half is one that plays throughout a boss fight. The inspiration behind this track was a combination of the boss's main theme (Carleton's theme) and music from bullet hell games. I wanted this track to be driving, energetic, and a little bit chaotic. This track was particularly difficult to mix because of all of the different elements in the music plus needing to balance it against both dialogue and sound effects.

To read some more of my processes regarding creaing music concepts, themes, and production - check out my blog here: https://juliebuchanan.wordpress.com 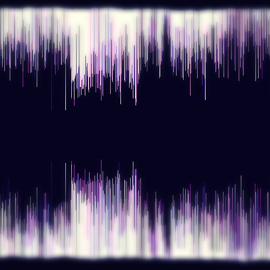 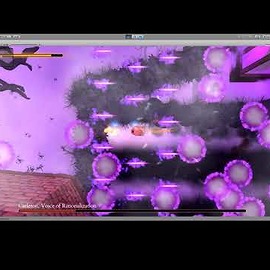 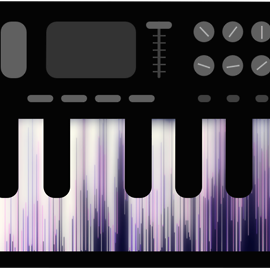 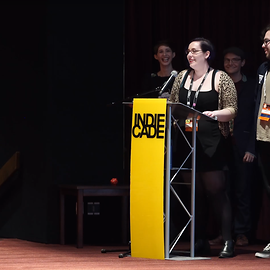